From A Shed to An Off-Grid Cabin

Many people interested in off-grid cabins are quickly overwhelmed by either the time investment to build one themselves or the financial investment to have one built for them. Initially, this was the case for Chris as he began to research the common options for building an off-grid cabin on his hunting property. But, a healthy dose of practicality, determination, and ingenuity led him to a solution that was both quick and financially feasible. Thankfully, we got to be a part of this solution. It turns out that a Northland Shed makes a wonderful off-grid cabin when Chris gets involved. 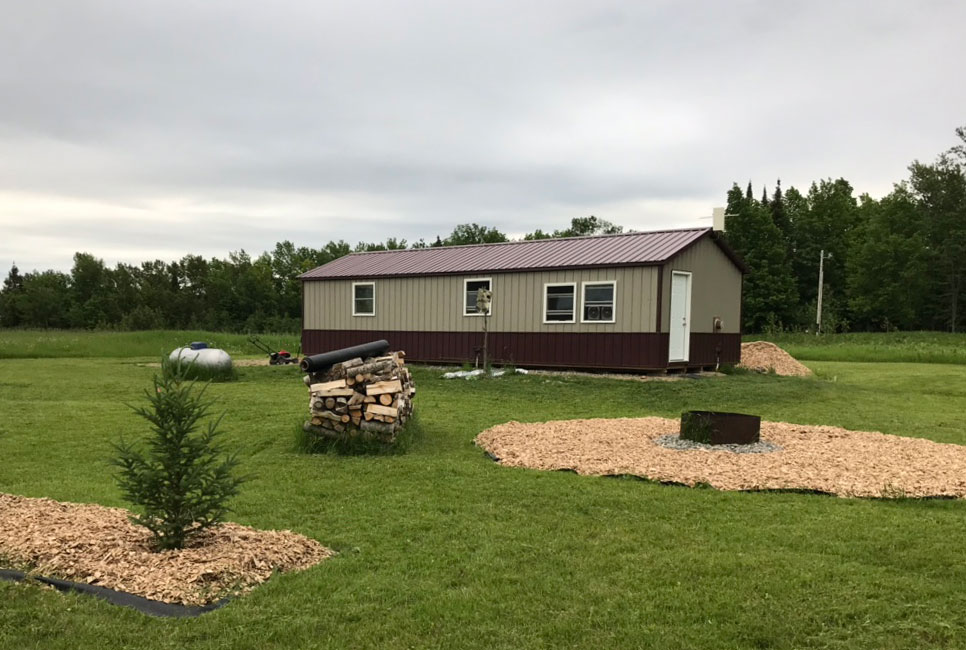 Chris lives in Sioux Falls, SD where he works a normal day job in sales. But, it is not unusual for him to be out of town on the weekends, involved in his passions of hunting, fishing, and just being immersed in the great outdoors. Along with these passions he is quite interested in natural habitat preservation and developing places that benefit wildlife. These interests led him to purchase a 40-acre hunting property in northern Minnesota. It is here that he often spends time throughout the year, hunting, and managing the woods and food plots for wildlife.

And, it was for this property that Chris began to research off-grid cabins for an on-site lodging option. 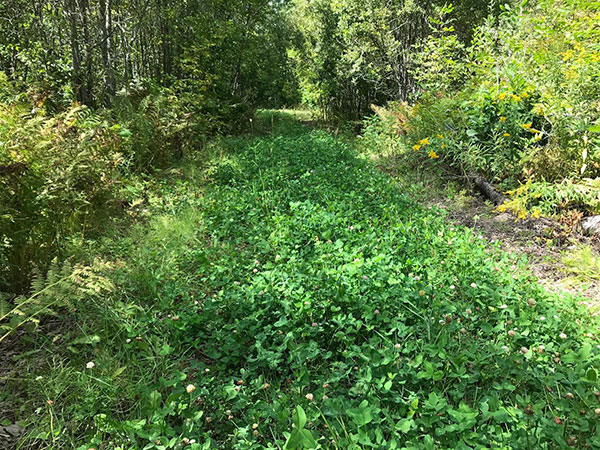 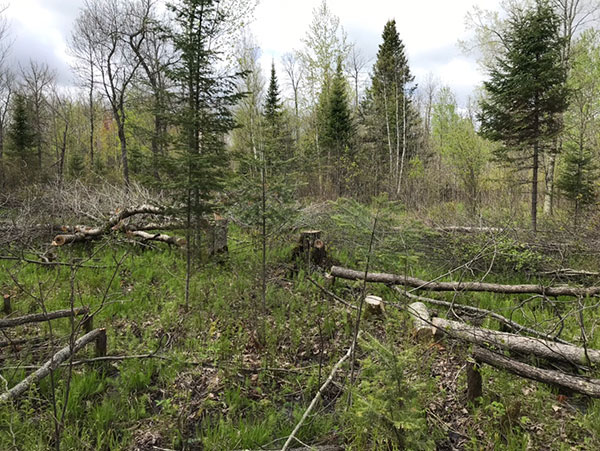 Choosing A Shed for the Off-Grid Cabin

Initially, he looked at all the common options – stick frame, pole barn, shipping container. But, he soon concluded that they were all either “incredibly impractical, or too expensive.” That was when he landed on the idea of using a prefab shed. Of course, we’re glad he did.

After looking around at some various shed options, Chris contacted Northland Sheds and arranged an in-person meeting with us to discuss the options and his specific needs. During that meeting we laid out all the possibilities and even brought the construction foreman in to ensure that everybody would be on the same page. Chris chose to upgrade to the best doors, windows, and insulation for his building and we were able to come up with a plan that everybody was happy with. “I left there really confident, knowing that these guys know what they’re doing and will be able to deliver what I want. It was unbelievable how good your stuff looked.” Chris says.

A few months later, we delivered a fully insulated, 16×40 metal shed to the hunting property. The interior of the shed was divided with a 21×16 cabin/living area and a roughly 17×16 garage/storage area. Chris informed us that we “delivered exactly what I wanted, down to the 1/16th inch.”

Apparently, he was impressed.

Video of the Shed Delivery

A Shed to Cabin Makeover

What impresses us, is what he did to finish out this shed and turn it into an off-grid cabin.

After only 4 days of work, Chris had flooring laid, wiring run, and the essential pieces in place for him and his cat, Bob, to comfortably lodge there. 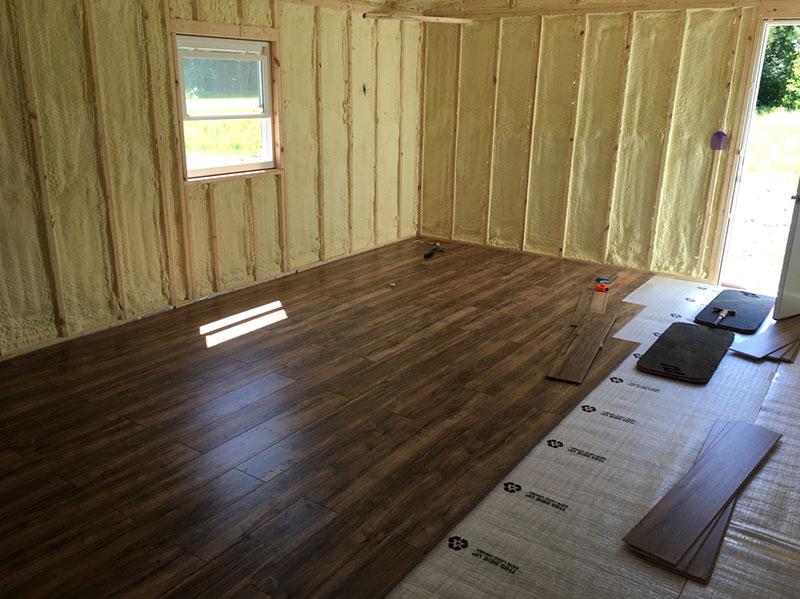 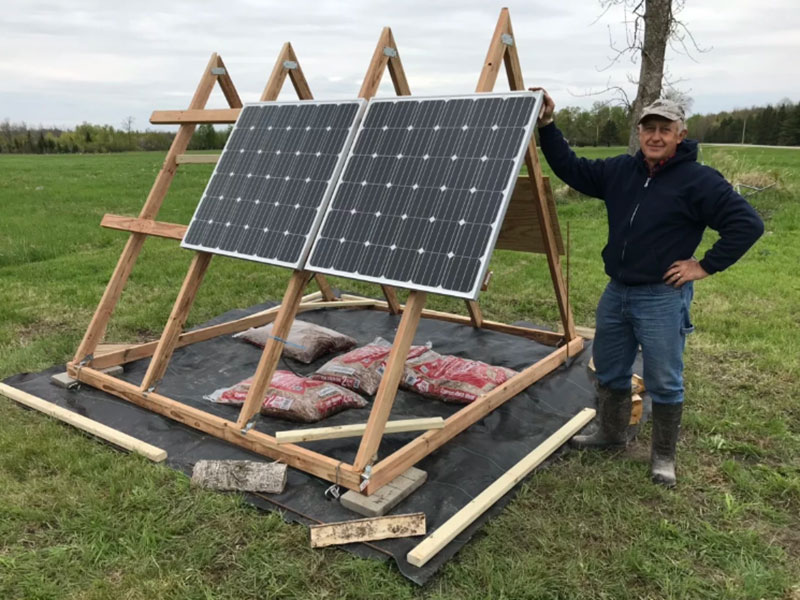 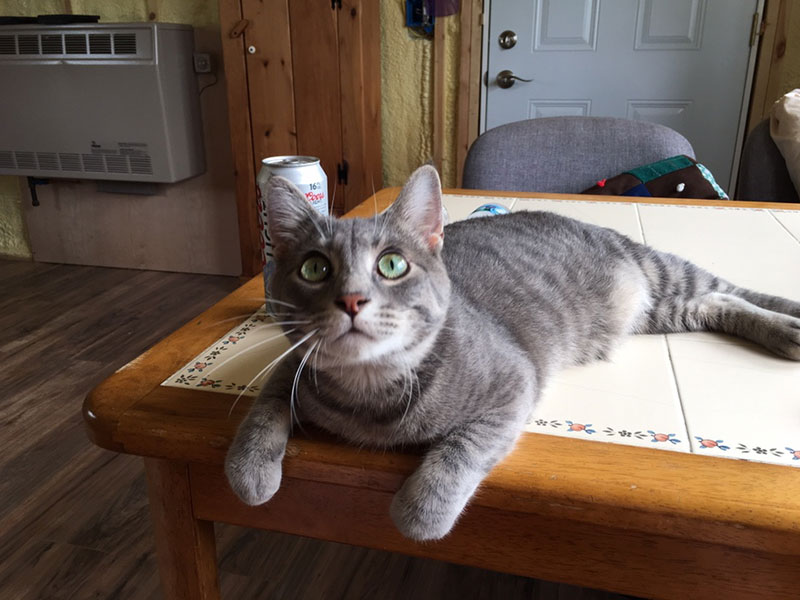 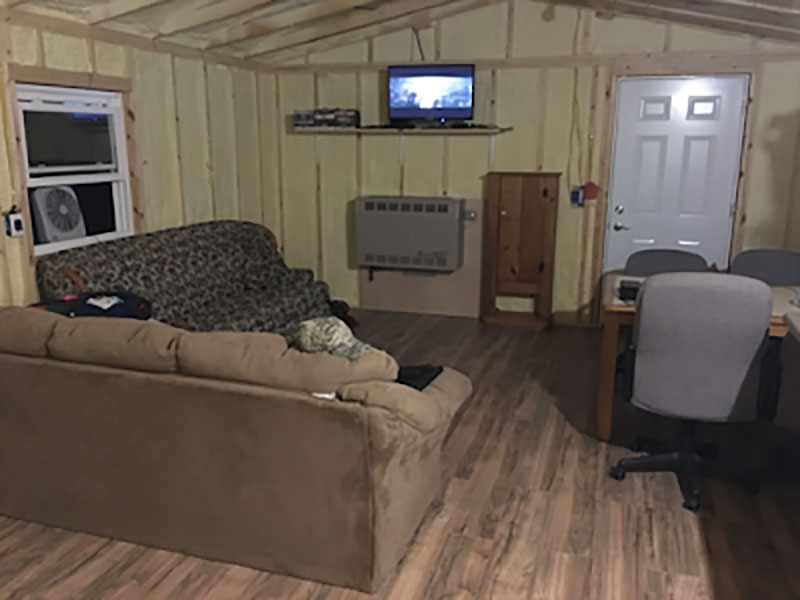 He had a propane tank installed and uses that to operate his propane fridge, cook his food, and heat the cabin. The whole cabin is wired for 12-volt and powered by solar. Chris is able to run his TV, an RV ceiling fan, window fans, and more with this setup. He also setup a small solar shower bag outside that can be used for a quick clean-up or just to cool off in the summer. 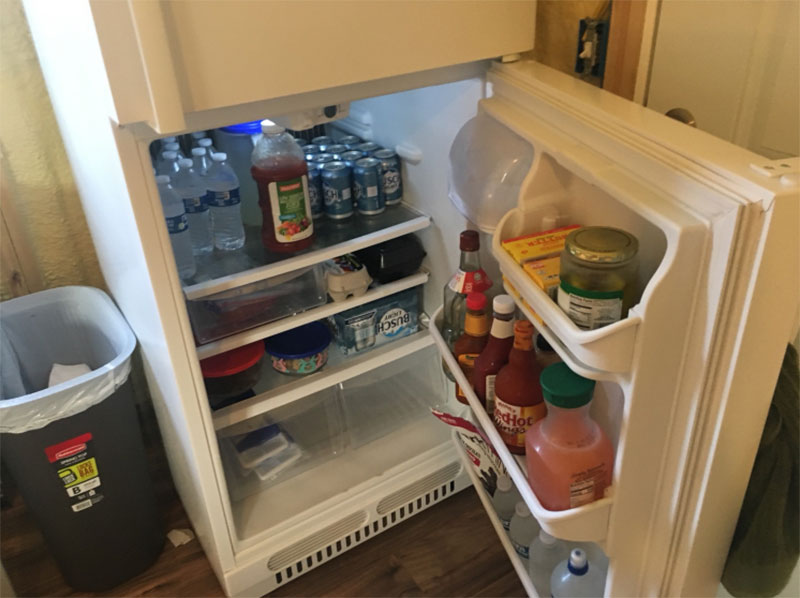 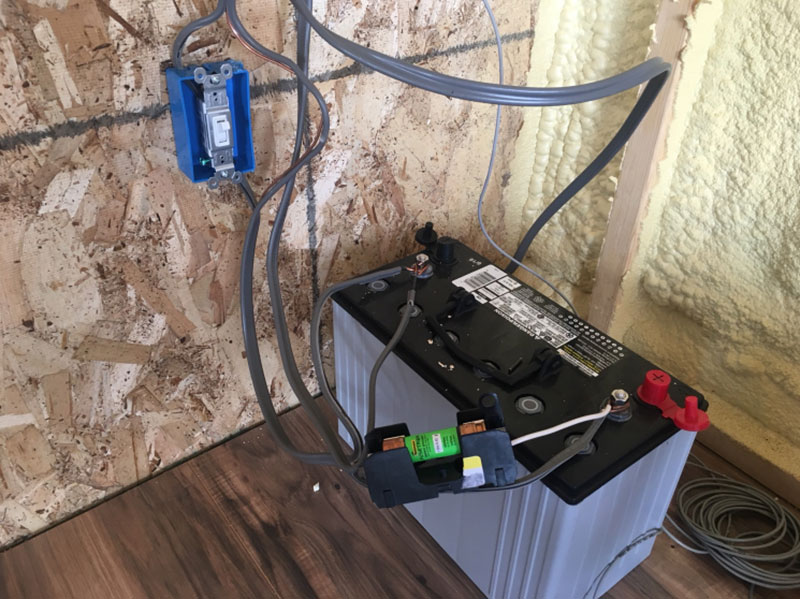 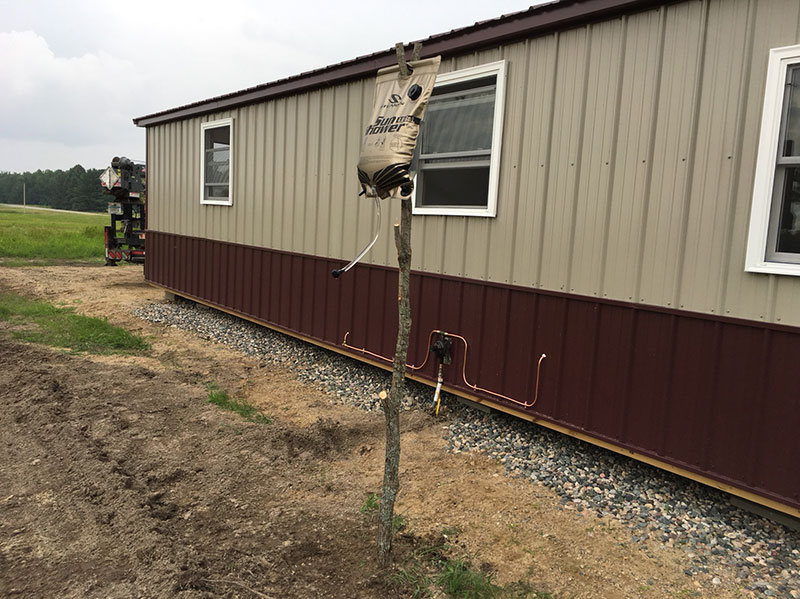 It Really Is Quite Simple

We asked Chris what his advice and encouragement is for others who are wanting an off-grid cabin. Here’s some of the things he had to say:

Find a team of experts to help

He says that there are so many things that you can blow extra money on when you start designing a project like this. Early on, Chris had some experts help him figure out his design and ensure that he was thinking through things properly. “I had somebody help me design my kitchenette,” he says. “Originally, I had plans to use a range and burner and the guy helped me to see that I don’t need that.”

He also had somebody help him engineer the electrical design. He says that solar can be both “incredibly complex and incredibly simple. The genius of it is in knowing what you should do and should not do on solar.” His advice is to convert equipment to propane for heating and refrigeration and then run the lights and other small things on solar.

You can do it

Chris says so many people that want an off-grid cabin are constrained, either by the expense or the time investment that is assumed. “People are thinking they either need to spend 3-4 years building on their own or spend $150,000 getting somebody to build a cabin for them. So many want to do what I’m doing. They don’t know that there is a simpler way.” 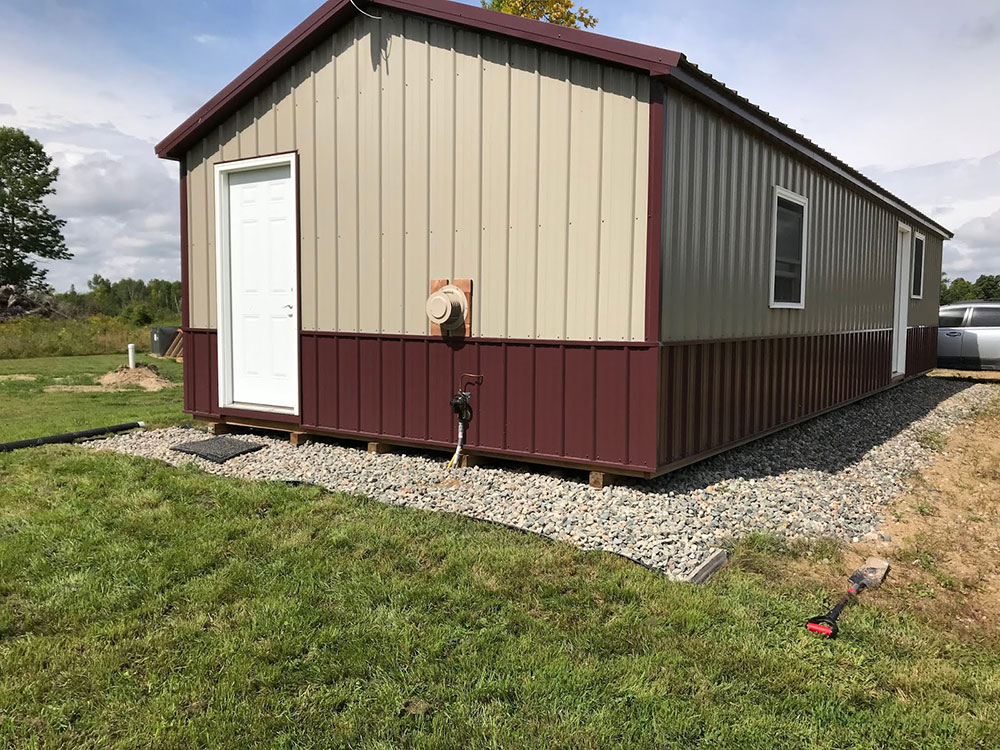 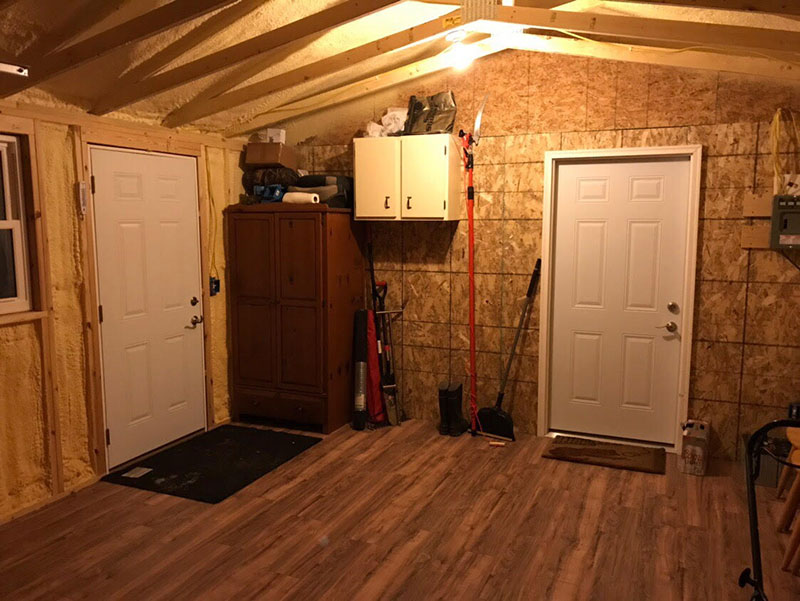 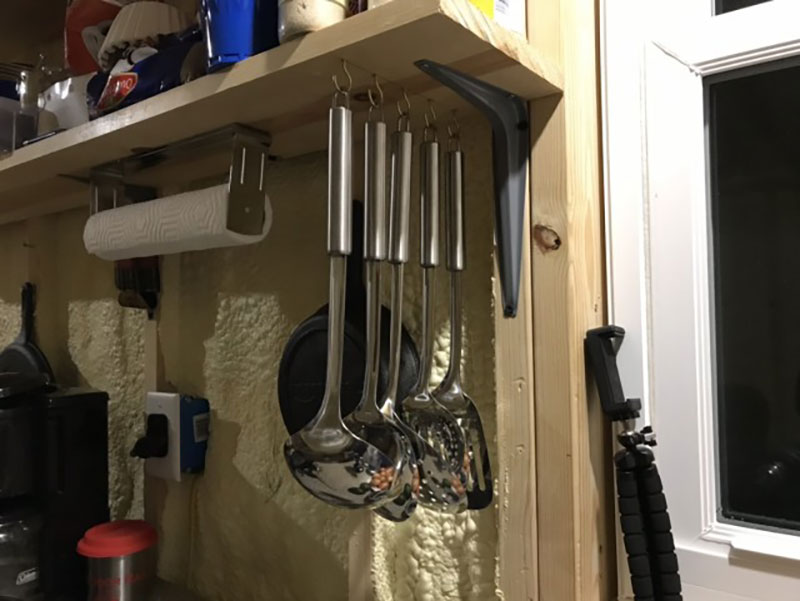 There definitely is a “simpler way”. After everything was said and done, Chris had a high-quality, practical, and comfortable off-grid cabin for $35,000 and only a few days of time invested in the project.

Chris basically has his cabin project where he wants it to be for now. His current plans are to just enjoy it for awhile and continue to develop and manage his hunting property. The cabin can comfortably sleep 4 people and he sometimes has friends or family that join him there.

Most of the time though, it is just him and his cat hanging out and working on the property on the occasional weekend. Whether he’s coming in from clearing some brush on a hot summer day or shaking the snow off his boots after a cold morning hunt, we’re quite confident that Chris will have a quality, comfortable cabin to relax in for many years to come.